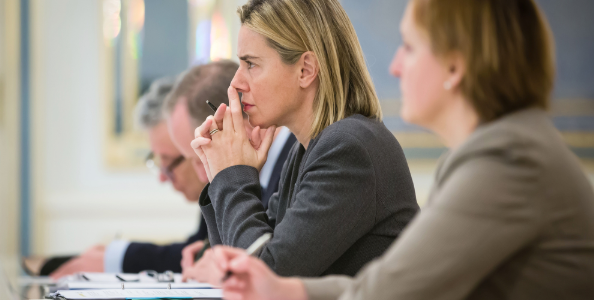 Iran is not the only loser if the Iran nuclear deal (the Joint Comprehensive Plan of Action or JCPOA) collapses. A collapse may be near given the U.S. exit from the deal, and U.S. sanctions not only affect American banks and companies but also prevent Europeans from trading with Iran. The U.S. policy is to cripple Iran´s economy and to force Iran to accept U.S. conditions for a new deal. The Iranians, in turn, need to see the economic benefits of the JCPOA in order to stay in.

The EU is between a rock and a hard place. “We stand committed to the JCPOA and its full implementation by all sides. Preserving the JCPOA is in our shared national security interest” stated the European leaders of France, Germany, and the United Kingdom (E3) as the United States exited the deal. The EU wants to maintain its credibility as a global actor but also preserve transatlantic relations, the backbone of its foreign policy.

The EU adopted its European Security Strategy in 2003, after an Iranian dissident group revealed undeclared nuclear facilities that fueled suspicions of Iranian noncompliance and prompted inspections by the International Atomic Energy Agency (IAEA). This security strategy, however, was less a reaction to Iran’s nuclear activities than it was to the US-led Iraq War and the fear that Iran would be next. “Effective multilateralism” in 2003 was an explicit critique of the U.S. unilateral behavior in Iraq.

The most important legacy of the 12 years of EU coordinated negotiations is to have taken the military option in Iran off the table. Military interventions do not take place when most of the superpowers—the EU, China, France, Germany, the United Kingdom, and the United States—sit at the negotiation table. In 2003, to avoid the military option, three EU foreign ministers decided to “talk to Iran” and start negotiations, providing both carrots and sticks to persuade Iran to abolish its nuclear program. The EU was very close to an EU-Iran agreement in 2005 when the United States decided to enter the negotiations and Iran was reported to the Security Council. Nevertheless, the E3 initiative and the later EU framing of the 12 years of negotiations did prevent the implementation of the military option.

With the U.S. exit from the JCPOA, the military option is again possible. The United States promotes regime change in Tehran—more or less indirectly—and may attempt to repeat the Iraq experience in Iran although with new allies. Alternatively, change may be initiated by internal turbulence. Aggravated economic problems may lead to further protests against the government and increase support for the hardliners in Iranian politics.

Click on the reference link to read the full article